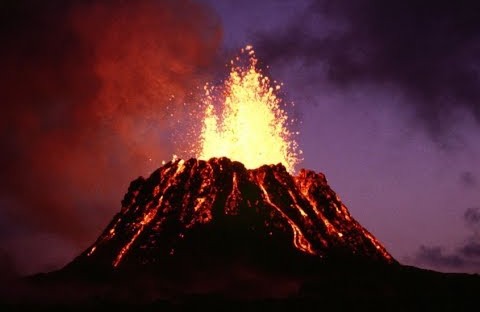 I live only a half day’s drive from the National Parks that take people’s breath away: Zion, Arches, Yosemite, Grand Canyon, etc. The list is long, but my favorite National Park is only reachable by plane from here: Hawai’i Volcanoes National Park on the Big Island of Hawai’i.

Six years ago, I was a resident of the region that is now under fire from the gushing caldera sitting in the middle of this park. I always felt the impending ferocity of Hawai’i Volcanoes living just 3 miles from it. I walked on lava beds underneath which was flowing lava, a mere 1,600 F undertow. I also watched that year’s flow run into the sea–a direct course from the summit crater in the park to the crashing waves of Uncle Robert’s in Kalapana. There was a walking path in front of Uncle’s that led to the black sand beach below and you could watch the whole red river trailing down the mountain, so close that its presence would paralyze you whole body standing before the deadly and captivating lava.

A psychic even warned me of the potential threat living on the Big Island. We had spoken a month before my arrival and he knew that its fate was tenuous. Pele, the goddess of the volcano was a fierce reality on Hawai’i: she would throw people off of it who no longer belonged; she would scar the landscape at any moment with her temperamental bouts of eruption; she would take away life as seen fit in a display of dominance and still require a ceremonial dance in her name. However, I had no idea how powerful she truly was until now.

Hawai’i Volcanoes already impressed us with her raw displays before, but now she is revitalizing our understanding of the unexpected power and unbreakable will of nature that is contained within our National Parks. This cataclysmic eruption is a reminder that the meaning behind preserving magnificent pieces of land in this country under the National Park Service is to stand in perpetual wonder at the power and glory of the natural world. We can photograph awe-inspiring landscapes of unthinkable stone and rushing waters, but to stare at the face of living geological history where the earth recreates itself right before our very eyes is a whole other inspirational splendor. How can we not help but ponder the transitional nature of life on earth in light of this?

It has been years since I visited the island. Our stars have not aligned. I left a surfboard with a friend there thinking that I would be back soon. Who knows if it has been incinerated or if I can once again ride the waves of Pohoiki on it? Bays have been filled in with new land and thousands of structures have been wiped out by the active flow. Fortunately, very few lives have been taken. Some of my friends are still inhabiting the region that is now landlocked in the southern coast of Puna. They are servants to the forces of Pele who knew all along what they were risking by falling in love with such a stunningly tenuous strip of paradise and they are proud to still be there. Until we meet again. A hui hou, Hawai’i.

Yoga teacher, philosopher, lover of life. It's as simple as that! Join me on the journey. View all posts by morajudd

Mora is a yoga teacher, outdoor guide and sustainability entrepreneur. She muses with words when not outside exploring mother nature’s bounty in the surf or on land. The West is her chosen home with a passion for healthy eating, wellness, convening with nature and building strong communities.