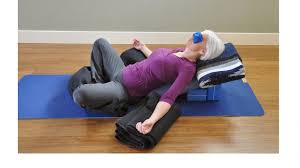 I just wrapped up a Yoga for Trauma Recovery training program this weekend with Joanne Varney and Rebecca Tayebi at Breathe Together Yoga. Going into the training, I thought it would be interesting to see how teachers are using yoga techniques to address modern-day trauma induced by a myriad of causes ranging from small traffic jams to large cases of abuse.

You might already be thinking, “this is going to be a heavy one,” but I assure you it is more palatable and relatable than you might think at first. Trauma is actually quite pervasive in today’s world and shows up as stress, grudges, bitterness In some ways, our inability to address trauma has helped it to shape our perceived limits of what is “normal” and socially acceptable. Just a few ways in which we have publicly normalized trauma are the news, reality tv shows, mass shootings, war, etc.

What is a person to do in a world that broadcasts images of humanity’s shadow side on the daily and provides us with few outlets to discuss, process and collectively reinvent a new image for ourselves? Out of many answers, my first is to visit your nearest yoga studio, my second is to watch Stephen Colbert. When the world becomes overwhelming, simplify and take it back home. How am I today?

My observation of trauma in the everyday really stood out the second week of training, when I visited an old friend in San Francisco and witnessed a commiseration of coworkers dissect the unhealthy work environment at their current (some former) employer. Overhearing this conversation reminded me of so many similar dialogues I had partaken in over the years about bosses, work environments, unhappy coworkers and bad careers moves. Only this time, I listened with different ears. These ladies hadn’t just laughed off their time with said employer, but they were still reliving the unprocessed (and undue) treatment they received in their time there. Three young, capable, open-hearted ladies who joined this company for all the right reasons and left with a bag full of bitterness and resentment. Why is this all too common?

There is a period of life, particularly in one’s 20’s and 30’s, when we make work decisions based off of factors that don’t resonate with our hearts: pursuing a career path that was chosen for us by parents, getting an under-or-unpaid position at the bottom of the ladder as a stepping stone, working for an unsavory boss out of desperation to get hired, not asking for a raise, staying a little too long in a dead-end situation, enduring verbal or physical abuse from a superior and never speaking up about it, etc. We somehow believe that enduring these hardships and paying one’s dues in the warlike work world will land us at our desired destination, unaware of how it changes our whole reality—or maybe too busy to pay it mind.

NPR correspondant, Jonathan Blitzer, spent the last couple of weeks in El Paso, Texas where he interviewed the mothers awaiting trial for asylum status who have, in the interim, been separated from their children. He spoke on the air yesterday with Terry Gross and highlighted the physical states of these women he spoke with. Some were suffering from convulsions and unstoppable, hysterical bouts of crying, others were sallow in complexion with numb looks in their eyes not having spoken a word in weeks, everyone else was somewhere in between the two.

I began to reflect on the journey these women had taken that led them to this moment. Chances are that most of them travelled a long road by a combination of foot and automobile, maybe hitching rides or taking economico buses from as far as South America. No doubt that some also used coyotes to help them through the rougher parts of the journey, paying their fare to promised freedom. And then the walking. Walking through desert lands, gang lands, foreign towns. Risking it all, but really the biggest risk was arriving here in the USA. Just imagine the fortitude it took to reach the border and then, in an unexpected moment, you landed on “Go” in Monopoly only to be sent back to “Go to Jail.” A cruel board game they are playing on at the southern border, where strength of character is challenged beyond imaginable circumstances.

What we have here is a case of chronic trauma culminating in a severe, publicly witnessed wound. If anyone doubts the effects of trauma and stress on the body, then all they have to do is witness the somatic states of these women detained at the border. This is an extreme example that most of us cannot personally fathom, of how trauma manifests in the human body. And still, even on a microcosmic scale, trauma takes its toll and can leave behind almost imperceptible marks of stress and resistance that surface as muscular tension, disrupted sleep, jaw clenching, or unhealthy, repetitive patterns of movement. Even an involuntary, chronic eye twitch, of which I too have suffered, is a sign of unrest in the system.

Recent discoveries of the “interstitium” reveal that the connective tissues (the fascia) of the body are living waterways that carry neurogenic information from the central nervous system to every cell in the body. Where disruptive patterns of the physical body exist, there is surely an underlying miscommunication with/transference from the nervous system. Unprocessed and undigested experiences that trigger fight/flight/freeze in the autonomic nervous system become lodged as unaddressed trauma in the body system. Good news is that this is reparable.

Coming back to teach my Yin/Restorative classes this week, I also looked at the classroom differently. Instead of going too deep mentally with the students, I let the poses do the work and left longer periods of silence in the more restorative holds while peppering in a few points of inquiry, mostly based on observing sensation and then breathing with it. This left more time for everyone to get familiar with their own bodies, experiences and hopefully, connected to themselves. It has been particularly interesting to work with students here in Las Vegas, as it seems that this line of work is just getting introduced to the populace and the classrooms bring in a very diverse cross-section of the population. When I asked one older woman how she felt coming into a supported reclining bound angle pose (supta baddha konasana), her whole body surrounded and supported by props, her shaky voice let out with a sigh, “Very, very comfortable.”

With everyday events of tragic proportions happening all around us, there is only one place that  we can return to for global healing: to our own selves. This has been repeated so much in the yoga and self-help worlds that it rings as cliche, but I invite you to think about it for yourself. What good can you do if your inner world is not harmonious? How can we reverse the effects of pain and trauma without first finding a well of love within? Am I even capable of accessing forgiveness, compassion and peace?

We ended class last night with this wish: “May we walk through life as peaceful warriors: in line with our truth, speaking our unique voice and wishing no harm to self, others and the world.” My elder lady student held her hands in prayer a little longer than the rest of the class and proudly called back, “Namaste.” She proved to me that it’s never too late to start healing.

Yoga teacher, philosopher, lover of life. It's as simple as that! Join me on the journey. View all posts by morajudd

Mora is a yoga teacher, outdoor guide and sustainability entrepreneur. She muses with words when not outside exploring mother nature’s bounty in the surf or on land. The West is her chosen home with a passion for healthy eating, wellness, convening with nature and building strong communities.